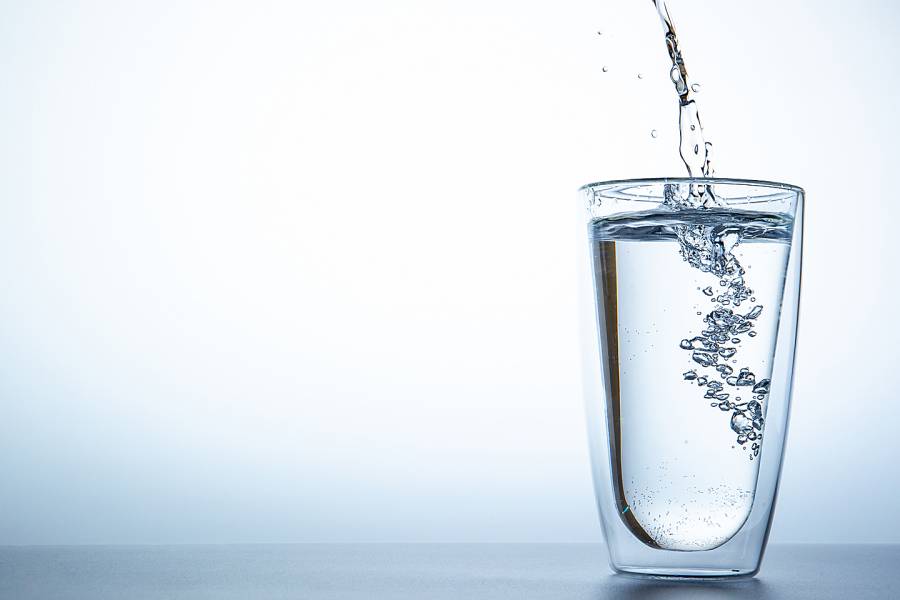 While no one’s saying you’ll wake up lighter simply by sipping water before bed (or any other time of day), evidence supports the water–weight loss connection: After all, 60% of your body is composed of water, meaning that the clear, calorie-free liquid plays a role in just about every bodily function. The more hydrated you are, research suggests, the more efficiently your body works at tasks that range from thinking to burning body fat.

Science suggests that water can help with weight loss in a variety of ways. It may suppress your appetite, boost your metabolism, and make exercise easier and more efficient, all of which could contribute to results on the scale.

While countless factors, behaviors, and predispositions can affect your body weight, if your goal is long-term, moderate weight loss, making sure you’re hydrated could be a good place to begin.

1. Water may naturally suppress your appetite.

When you realize you’re hungry, your first impulse may be to find food. But eating may not be the answer. “Thirst, which is triggered by mild dehydration, is often mistaken for hunger by the brain,” says Melina Jampolis, an internist and board-certified physician nutrition specialist. “You may be able to decrease appetite by drinking water if you are, in fact, low in water not calories.”

What’s more, drinking water can promote satiation because it passes through the system quickly, stretching the stomach. “This sends messages to your brain signaling fullness,” Jampolis says.

Elizabeth Huggins, a Registered Dietitian Nutritionist at Hilton Head Health, adds that though the results are temporary, “consuming water shortly before eating may help decrease food intake.” Research supports the theory: People who drank two glasses of water immediately before a meal in a small 2016 study ate 22% less than those who didn’t drink any water prior to eating.

About two cups should fill your stomach enough for your brain to register fullness.

2. Drinking water may stimulate your metabolism.

It’s possible that drinking water stimulates your body’s metabolism and energy expenditure, ultimately helping with weight management, according to Huggins.

In an eight-week study published in 2013, when 50 girls with excess weight drank about two cups of water half an hour before breakfast, lunch, and dinner without any additional dietary changes, they lost weight and saw reductions in body mass index and body composition scores.

It’s not magic: Drinking water appears to stimulate thermogenesis, or heat production, in the body, particularly when it’s chilled. The body has to expend energy to warm the fluid to body temperature, and the more energy expended by your body, the faster your metabolism (the process by which your body converts what you eat and drink into energy) runs. Specifically, drinking about two cups of 71°F water led to a 30% average increase in the metabolic rates of 14 healthy adults in a small 2003 study published in the Journal of Clinical Endocrinology & Metabolism.

Before you fill your glass and load your plate, though, keep in mind that the effects of thermogenesis probably won’t create substantial calorie deficits that result in weight loss. “Even if the effect is negligible, it is important to stay hydrated,” Huggins says, noting that there are few, if any, downsides to drinking more water.

Because water contains no calories, filling your glass with H2O instead of higher calorie alternatives such as juice, soda, or sweetened tea or coffee can reduce your overall liquid calorie intake. Choose water over the standard 20-ounce vending machine soft drink, and you’ll drink 250 fewer calories, Huggins points out.

As long as you don’t “make up” for those calories—i.e., walk out of the coffee shop with a muffin and water instead of your usual flavored latte—the calorie savings can add up quickly, she says.

Also interesting: Although diet soda contributes no calories, replacing diet beverages with water may be a factor that contributes to weight loss in certain groups of people. Overweight and obese women who replaced diet beverages with water after their main meal showed greater weight reduction during a weight-loss program in a 2015 study published in The American Journal of Clinical Nutrition. The researchers noted that the extra weight loss in those who drank water could be attributed to consuming fewer calories and carbohydrates, but more research is needed. All that said, since many diet beverages still hydrate and reduce calorie intake when used as a replacement for sugary beverages, they may help certain individuals lose weight.

Water is essential to the body during exercise: It dissolves electrolytes—minerals that include sodium, potassium, and magnesium—and distributes them throughout the body, where their electrical energy triggers muscle contractions required for movement, Jampolis explains. An electrolyte imbalance can lead to cramping, but that’s not the only side effect of drinking too little.

“When muscle cells are dehydrated, they break down protein (aka muscle) more quickly and build muscle more slowly, so your workouts are much less effective,” she says.

What’s more, the body loses fluids more quickly during exercise because it generates heat that’s shunted to the skin’s surface, where perspiration and subsequent evaporation (a cooling process) help with temperature regulation.

Staying properly hydrated also helps maintain your blood’s volume, so you can optimize the expansion of blood vessels at the skin’s surface to release heat, Jampolis says.

“If your body can’t dump excess heat via sweating, you’re setting yourself up for heat exhaustion or worse,” she says. “Being adequately hydrated can improve your workouts by decreasing fatigue, which can allow you to work out longer and burn more calories.” That’s why it’s so important to hydrate before and throughout your workout, not just when you start to feel thirsty.

Drinking water facilitates the production of urine, which is largely made up of water, and the movement of feces, since water keeps stools soft. In other words, the more hydrated you are, the easier it is for your system to move things along and the less likely you are to suffer from constipation and bloating.

In addition, adequate hydration promotes kidney function, flushes harmful bacteria from the urinary tract, and prevents kidney stones, which can occur with more concentrated urine, according to Huggins.

Upping your water intake may increase lipolysis, the process by which the body burns fat for energy, according to a 2016 mini-review of animal studies published in Frontiers in Nutrition. “We’re not certain of the mechanism, but mild dehydration decreases lipolysis, which may be due to hormonal changes,” says Jampolis, who was not associated with the review. Another theory posed in the animal studies: Water expands cell volume, which could play a role in fat metabolism. However, it remains unproven among human subjects.

When you’re dehydrated, you may experience symptoms such as fatigue, dizziness, and confusion—and who makes healthy decisions under those conditions? Dehydration, the researcher of the 2016 mini-review found, also may be linked to sleepiness and reduced alertness. And another study, published in the International Journal of Sports Medicine, found that dehydration increases your body’s production of cortisol, the stress hormone.

“These symptoms could affect your motivation to exercise, cook at home, and make better food choices,” Jampolis says.

Other health benefits of drinking water

Remember, your body is made up of 60% water, so weight loss isn’t the only bodily process affected by proper hydration. These are just a few examples of what else water can do:

Scientists still don’t know the exact mechanism, but given water’s important role in the majority of your bodily functions, it makes sense that it would be instrumental in skin health, too. In a 2015 study published in the journal Clinical, Cosmetic and Investigational Dermatology, researchers found that increasing water intake would affect the skin the same way as a topical moisturizer and could positively impact normal skin physiology, including elasticity (the loss of which is related to sagging and wrinkles).

Just like the rest of your body, your brain depends on H2O to work most efficiently—water actually composes 73% of the brain. Even slight levels of dehydration (as little as 2% water loss) impair your performance in tasks that require attention, cognitive functions, physical movement, and immediate memory skills, according to research published in the Journal of the American College of Nutrition.

“Water plays a major role in keeping the blood flowing effectively,” Huggins says. “When you’re dehydrated, the plasma/blood cell ratio changes in a way that makes the blood thicker and more viscous. This makes it tougher for blood to flow where it needs to flow, increasing the stress placed on the heart.”

In addition, when your body’s cells don’t have enough water, the brain secretes a chemical that constricts the blood vessels, which can lead to hypertension or high blood pressure, which in turn can increase the risk of stroke and heart disease. Staying hydrated keeps your blood vessels from constricting so blood can flow normally.

How much water should you drink?

You’ve probably heard the common “eight 8-ounce glasses per day” rule, but the reality is, the amount of water needed varies greatly depending on age, gender, health, physical activity, tendency to sweat, and more. The majority of healthy people adequately meet their daily hydration needs by letting thirst be their guide, according to the National Academies of Sciences, Engineering, and Medicine, or NASEM.

The average American adult drinks nearly five cups of water a day, according to the Centers for Disease Control and Prevention. The general recommendation from the NASEM is approximately 91 ounces (about 11 cups) of water each day for women and approximately 125 ounces (about 15 and a half cups) for men. About 80% of the recommended fluid intake comes from drinking water and beverages, while the other 20% comes from water-rich foods.

One way to determine whether you’re drinking enough water is to peek in the pot after you pee. “It’s best to go by the color of your urine,” Jampolis says. “If it’s dark yellow, you aren’t drinking enough. Aim for light yellow.”

The upshot: Water and weight loss

The science does show that drinking water may facilitate weight loss and encourage other positive health outcomes. “Water is critical in every cellular activity of our body from head to toe,” Huggins says. “Staying hydrated helps the body run more efficiently and helps us feel better.”

But drinking more water should be only one small part of your wellness journey. “Drinking water is not going to have a huge weight loss effect, and without calorie restriction and/or exercise, just drinking water is not likely to lead to significant weight loss,” Jampolis says. As always, she says, it’s important to embrace a more comprehensive and sustainable approach.